What settings do I need to capture fast-moving subjects?

Subjects that are considered fast-moving

There are so many subjects that can be considered fast-moving. So to make it easier we’ll start with the slowest first and that would be kids running. The fastest are motorcycle and car racing events

Now there is a huge difference in speed between them but the technique is the same.

Let’s go through the settings

I’ll give you an example of why it’s important. I was shooting a dog agility competition in 2009, and a little Jack Russell called Petie was doing the course with his owner. Dogs names I remember, owners not so much. I was waiting for him to take a sequence of jumps in front of me. On the last jump, he clipped the top bar with his back legs. This threw his back legs up and he ended up in a handstand position still moving forward at a rapid rate. Incredibly he kept going forward and got all four paws back on the ground, and completed the course.

If I had only taken one shot there wouldn’t be a story to go with the photos. I was using Canon 30D’s back then and they shoot 5 frames-per-second. I got 3 great shots of the incident which happened in the blink of an eye.

The funny thing is my 11-year-old daughter Kenzie was with me, and she used my 2nd 30D with the 17-55mm kit lens, I was using a 70-200 2.8 lens, I wouldn’t let her use my good lenses. Anyway, she was sitting next to me when Petie hit the jump and got the same sequence I got but from further away.

I was both humbled and proud. Anyway, shoot in High-Speed Continuous mode and capture all the action.

Your aperture setting is dependent on how far away from the subject you are and how deep the depth of field needs to be. Use the Photopills app to figure out what it should be.

Understanding how depth of field works, and setting the aperture is crucial to controlling your results. Use Photopills until you get the hang of it.

To capture fast-moving subjects you need a fast shutter speed, but not always, I’ll cover that later.

To freeze a child running you need a minimum shutter speed of 1/250 or maybe higher if your kid is a future Olympic athlete. For a high-speed motorbike, you would need 1/2000+.

If you can’t get your shutter speed high enough you can turn your ISO up. Keep turning it up until the shutter speed is where you need it. This is easy in Aperture Priority mode. 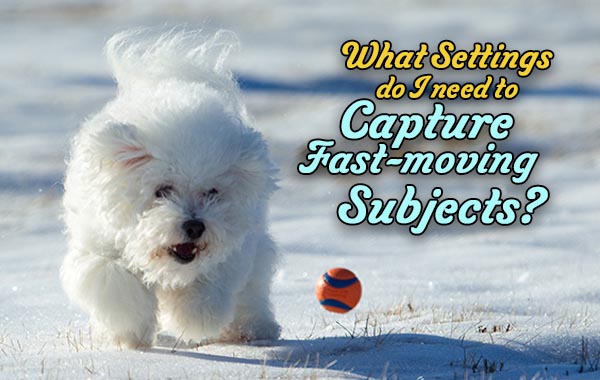 Panning is a technique where you follow the subject as it passes you. Using a slower shutter speed the photos give the feeling of movement and speed. The trick is to pan the camera at the same speed as the subject.

If I was taking photos of a kid running, instead of a shutter speed of 1/250, I would use a slower  1/125. As the kid runs past me I follow them while taking shots. Now because I’m shooting at 1/125 the arms and legs might have a slight blur but that’s OK. The background is a smooth side-to-side blur and emphasizes the movement in the photo.

Combination of the Two

Going back to my dog agility story, I used both high shutter speed and panning to get the sequence. So the background wasn’t as blurred side-to-side because I used a fast shutter speed.

I’ve used this technique when shooting sports and action shots over the years and it works great.

Set the Aperture for the correct depth of field needed.

Use a fast Shutter Speed, or maybe slower when panning.

Start with a low ISO setting.

Turn the ISO up if your Shutter Speed isn’t fast enough.